Brazil at a Crossroads: Environmental and Food Politics Under the Bolsonaro Regime. From Ecocatastrophe to zero deforestation and back again: A natural experiment in environmental governance 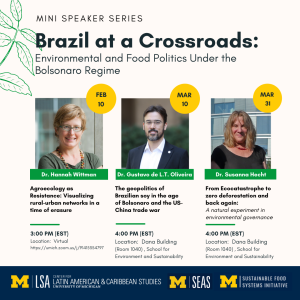 The Center for Latin American and Caribbean Studies, the School for Environment and Sustainability, and the Sustainable Food Systems Initiative present:

Brazil at a Crossroads: Environmental and Food Politics Under the Bolsonaro Regime

When Jair Bolsonaro, a right-wing populist, was elected as Brazil’s president in 2018, people began wondering about the consequences of that election for the environment, food systems, and trade, among many other social and ecological issues. In this lecture series, Hannah Wittman, Gustavo Oliveira, and Susanna Hecht will explore the impacts of the Bolsonaro regime on food security and agroecology, on the conservation of the Amazon forest, and on international trade with China, as well as bright spots of resistance and innovation towards sustainability.

Dr. Susanna Hecht | From Ecocatastrophe to zero deforestation and back again: A natural experiment in environmental governance

From 2004 to 2012 Brazilian deforestation dropped by 80%. This involved several institutional, political, and market dynamics that structured “socioambientalism” as part of the development practice for Amazonia. While widely lauded, several other “adverse forces” were at work, and in any case, the cerrado (Brazilian savanna) was falling under the tractors of massive soy and sugar expansion. With the rise of Micheal Temer, and the election of Jair Bolsonaro, the configuration and politics changed dramatically. The central question now is whether processes that support forests and forest livelihoods can be reactivated? For a number of reasons, probably not.