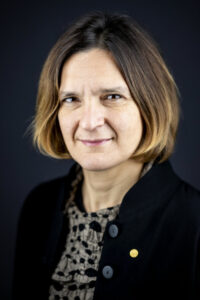 Which policies and institutions fuel global prosperity? What are the solutions to the issues facing modern economies and societies around the world, including slowing economic growth, immigration, income inequality, and climate change? Join us Monday, Sept. 20, for a conversation with Nobel Prize-winning economist Esther Duflo, whose research into understanding the economic lives of the poor aims to help design and evaluate social policies to improve citizens’ well-being and protect human dignity.

Esther Duflo is the Abdul Latif Jameel Professor of Poverty Alleviation and Development Economics at the Massachusetts Institute of Technology, where she received her PhD in 1990, and the co-founder and co-director of MIT’s Abdul Latif Jameel Poverty Action Lab. Duflo has received numerous academic honors and prizes, including the 2019 Sveriges Riksbank Prize in Economic Sciences in Memory of Alfred Nobel. In 2011, her book Poor Economics: A Radical Rethinking of the Way to Fight Global Poverty won the Financial Times and Goldman Sachs Business Book of the Year Award and has been translated into more than 17 languages. As an esteemed expert in her field, Duflo’s most recent book, Good Economics for Hard Times: Better Answers to Our Biggest Problems, highlights solutions to economic issues facing societies around the world. Duflo is also the editor of the American Economic Review, a member of the National Academy of Sciences, and a corresponding fellow of the British Academy.