Roundtable and Q&A with Hilton Als and Aisha Sabatini Sloan 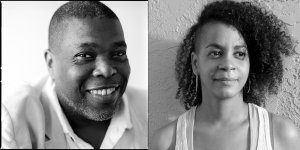 Please join us in the Hopwood Room for a discussion between essayists Hilton Als and Aisha Sabatini Sloan. This lunchtime event will be catered; food will be available at 11:30, and the discussion will start at noon.

Hilton Als began contributing to The New Yorker in 1989, writing pieces for ‘The Talk of the Town,’ he became a staff writer in 1994, theatre critic in 2002, and lead theater critic in 2012. Week after week, he brings to the magazine a rigorous, sharp, and lyrical perspective on acting, playwriting, and directing. With his deep knowledge of the history of performance—not only in theatre but in dance, music, and visual art—he shows us how to view a production and how to place its director, its author, and its performers in the ongoing continuum of dramatic art. His reviews are not simply reviews; they are provocative contributions to the discourse on theatre, race, class, sexuality, and identity in America. Als is an associate professor of writing at Columbia University’s School of the Arts and has taught at Yale University, Wesleyan, and Smith College. He lives in New York City.

Aisha Sabatini Sloan was born and raised in Los Angeles. Her writing about race and current events is often coupled with analysis of art, film and pop culture. She studied English Literature at Carleton College and went on to earn an MA in Cultural Studies and Studio Art from the Gallatin School of Individualized Study at NYU and an MFA in Creative Nonfiction from the University of Arizona. Her essay collection, The Fluency of Light: Coming of Age in a Theater of Black and White was published by the University of Iowa Press in 2013. Her most recent essay collection, Dreaming of Ramadi in Detroit, was just chosen by Maggie Nelson as the winner of the 1913 Open Prose Contest and will be published in 2017. She is currently a Helen Zell Visiting Professor in Creative Nonfiction at the University of Michigan.