The Unexpected Power of Selflessness: Giving Back for Father’s Day 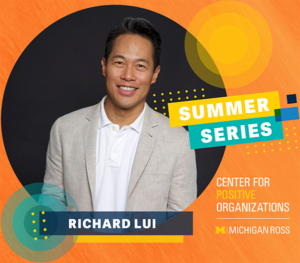 Seven years ago, Richard Lui walked into his supervisor’s office at NBC’s 30 Rock headquarters, prepared to give up his dream news anchor job. Having just learned of his father’s Alzheimer’s, the journalist wanted to be with him during his important last years, even if it meant setting aside his career. Lui reduced his work hours and joined 53 million Americans in becoming a family caregiver. His book, Enough About Me, is inspired by that decision to live to take care of someone else.

As we look toward celebrating Father’s Day soon, we invite you to join us for this heartfelt fireside chat hosted by Julia Lee Cunningham, where Lui shares how one of the big ideas of our time is more in reach than we thought. How small choices toward selflessness are not a compromise. And as we celebrate the love and learnings that fathers and father figures contribute to our lives, Father’s Day can also be a day for everyone to show that choice by choice, step by step, we can do something bigger than ourselves.

Book Giveaway: As a gift from Richard Lui, the first 40 people who register and attend this virtual event will receive a complimentary copy of his book, Enough About Me: The Unexpected Power of Selflessness. Full details can be found here.

Author Richard Lui is a veteran and award-winning journalist with more than 30 years in television, film, technology, and business. Currently at MSNBC and previously with CNN Worldwide, he is the first Asian American man to anchor a daily national cable news program, and a team Emmy and Peabody winner. He has just completed an Oscars Qualifying documentary on student caregivers in military families that will hit national broadcast and mainstream streaming in late spring 2021. In addition, Richard’s 15-year business career involves a fintech patent and launching six tech brands over three business cycles. Richard has lived, worked, and volunteered on every continent.