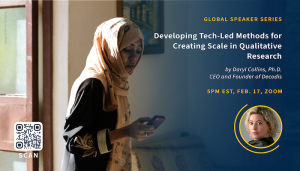 Traditional surveys and questionnaires can be imprecise methods for understanding the needs and motivations of low-income and vulnerable populations. In a Feb. 17 virtual discussion, acclaimed author and entrepreneur Daryl Collins will explore how technology can help researchers, nonprofits and businesses engage and serve these communities around the world.

During the talk, Collins will share examples of how her company, Decodis, is using technology to collect and analyze qualitative data in a more scalable and lower-cost manner. Collins will share examples of collecting data using WhatsApp audio responses to understand changes in gender norms and assessing Google Play reviews of digital lending apps in India. In both examples, Collins will share how she and her team used Natural Language Processing (NLP) – a common market tool – to detect key topics and phrases to unpack the meaning of the responses. She’ll also share how she and her team analyzed speech signals (such as pitch, duration of responses and voice modulation) in the audio files to determine whether the respondent was engaged in their responses, when the respondent was unsure, and when the respondent gave them a “canned response” — i.e., telling the researchers what he/she thought the researchers wanted to hear.

The William Davidson Institute (WDI) and the University of Michigan’s Poverty Solutions are co-sponsoring the talk, which begins at 5 p.m. is free and open to the public.

As a pioneer working at the intersection of finance and human vulnerability, Collins has built a broad portfolio of work with financial service providers, foundations, bilateral donors and governments. Collins’ work is grounded in a deep understanding of the financial lives of individuals. She is the author of the ground-breaking “Portfolios of the Poor” and creator of the Financial Diaries, a research tool used in over 10 countries, including South Africa, Kenya, Mozambique and Tanzania.

People living at or near poverty levels are less likely to speak their minds when responding to surveys and other efforts to collect data. This hesitancy is understandable, but it also creates a real challenge for researchers, enterprises and policymakers to better understand their needs, said Heather Esper, Director of WDI’s Performance Measurement & Improvement group.

“Daryl Collins is truly a pioneer in collecting and analyzing data to better understand the lives of low-income and vulnerable individuals at scale,” Esper said. “The qualitative methods she uses shed more light on what individuals are saying by accounting for how they say it.”

Collins recently established Decodis with a team of linguists and Natural Language Processing data scientists. Decodis seeks to advance scale and robustness in qualitative research techniques by providing tech-led consumer research methods that are insightful, scalable and low cost. The Decodis team is currently working on a range of projects across a breadth of countries, languages and sectors to explore new ways of both collecting and analyzing open-end response data.

Collins holds bachelor’s and master’s degrees in economics from the London School of Economics and a Ph.D. from New York University. She spent the last decade as Managing Director and CEO of BFA, a niche financial inclusion consulting practice with offices in Boston, New York, Nairobi, Accra, New Delhi and Medellin.