THE CONVERSATION – September 29, 2016
by Aradhna Krishna and Tatiana Sokolova 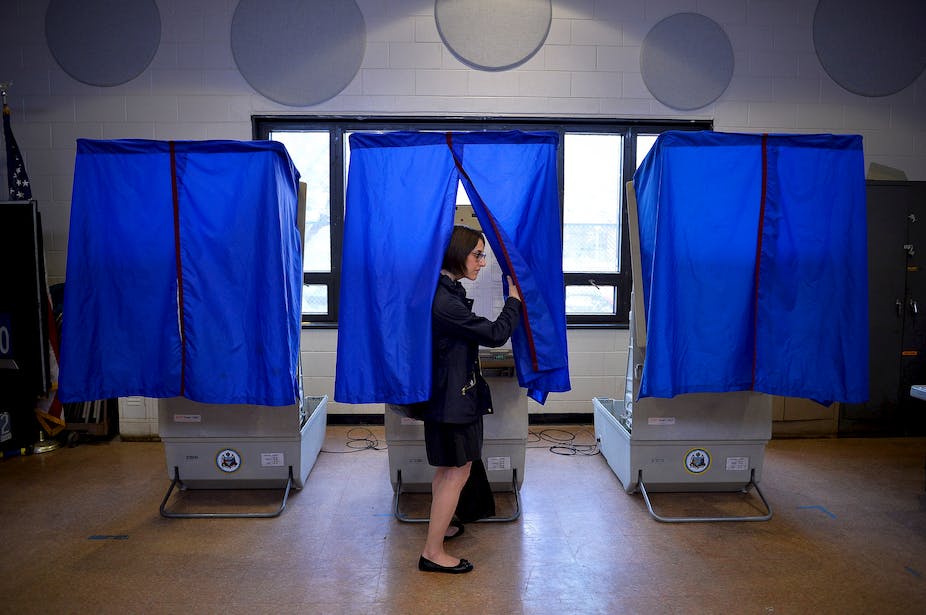 How do voters select a candidate when no one they like is on the ballot?

Behavioral scientists have studied decision-making – including voting – for decades. However, researchers usually give respondents at least one appealing option to choose from.

This led us to wonder: What do voters do when they consider all of the options bad? Do they fall back on party affiliation, or simply toss a coin? This question is especially appropriate in the current presidential election because the two front runners have the lowest favorability ratings ever.

When we did research to answer this question, we learned that in situations where all of the choices are bad, people tend to vote by rejecting the choices they didn’t like, rather than by affirmatively choosing the one they disliked least.

Imagine there are two undesirable candidates named Tilly and Ron. Given this “two bad choices” option, voters will be more likely to select Tilly because they reject Ron, rather than select Tilly proactively.

While the end result may be the same, the thought process that leads to this decision is quite different.

As behavioral scientists who study how people make decisions, we think this distinction could affect the upcoming presidential election. If people select between Clinton and Trump by using rejection rather than choice, then the information they use to make their decisions will be different.

In some ways, it may be better. Voters using rejection are more deliberate. They are less likely to be swayed by unimportant information about a candidate that they read or hear on radio, television or Facebook. They may pay less attention to rumors. In fact, conscientious voters may be well served to actively adopt a rejection strategy for their vote in order to make a choice more deliberately.

In nine separate studies we conducted, some of which will be published in an upcoming Journal of Consumer Research, we found that when people use rejection strategies, they also become more deliberate in their decision-making. In other words, they pay more attention to all information they have – both good and bad – and don’t get swayed as much by one piece of information that sticks out.

In our research, we saw more deliberation in rejection decisions and less of a tendency to be swayed by emotional, in-your-face information.

For example, one of these studies determined that people were less likely to vote based on party affiliation if they voted by rejection, rather than by choice. Respondents also took less time to make their decision in the choice condition versus the rejection condition.

We reached these results by revisiting a classic study known as the “Asian disease problem.”

The Asian disease problem was first proposed by the behavioral economists Daniel Kahneman and Amos Tversky in 1981. It is well-studied because of the contradictory choices people make, and is one of the many conundrums that Kahneman proposed which later won him the Nobel Prize.

In the standard formulation of the Asian disease problem, people choose between two programs to combat an unusual Asian disease: program A, which offers certainty; and program B, which involves a risk.

The original research showed that people change their preferences between the two programs depending on how the options are described.

That may seem rational. However, change the wording and the results also change – even though the theoretical loss of life remains the same.

Our new research revisits this classic problem to study what would happen if the respondents were choosing which program to reject instead of which one to choose. Would people be swayed less by the attention-grabbing words like “save” and “die”?

When we asked respondents which program would you reject, respondents’ selections were affected less by the use of the emotional words. Program A was selected by 48 percent in the first pair and 43 percent selected it in the second. In other words, the decision between program A and program B was similar, whether “save” or “die” was used to describe the programs.

The study results indicate that wild in-your-face claims made by candidates will get less weight if people use rejection strategies to vote.

Princeton psychology scholar Eldar Shafir has also found that rejection makes people focus on negative attributes. Perhaps the candidates’ campaign managers know this already and that is why the negativity in this election has been so high. But, the point to remember is that this cannot be a shallow negative attribute like sounding bossy or having a spray-tanning habit. People voting by rejection will be more deliberate – and will look carefully at what makes a candidate bad. Emotional claims will not work. Voters will think carefully about why they want to reject one of the candidates.