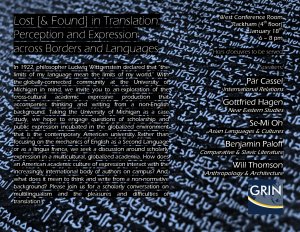 In 1922, philosopher Ludwig Wittgenstein declared that “the limits of my language mean the limits of my world.” With the globally-connected community at the University of Michigan in mind, we invite you to an exploration of the cross-cultural academic expressive production that accompanies thinking and writing from a non-English background. Taking the University of Michigan as a case study, we hope to engage questions of scholarship and public expression incubated in the globalized environment that is the contemporary American university. Rather than focusing on the mechanics of English as a Second Language or as a lingua franca, we seek a discussion around scholarly expression in a multicultural, globalized academia. How does an American academic culture of expression interact with the increasingly international body of authors on campus? And, what does it mean to think and write from a non-normative background? Please join us for a scholarly conversation on multilingualism and the pleasures and difficulties of translation.

Hors d’oeuvres to be served

Western Europe, the birthplace of the modern nation-state, is now home to several polities facing threats to their political and territorial integrity. The demands of subnational challengers run the gamut from greater political and/or fiscal autonomy within established states to formal separation and political sovereignty. These challengers have employed a variety of strategies in pursuit of those demands, including drafting legislation, organizing mass protests, and holding referenda. This panel brings together experts on intra-state conflict in Italy, Spain, and the United Kingdom. The panelists will explore the sources of grievances by regional actors in the Northern League, Catalonia, and Scotland; examine the nature of their goals and strategies; and discuss the response of central state actors to these challenges to the status quo. 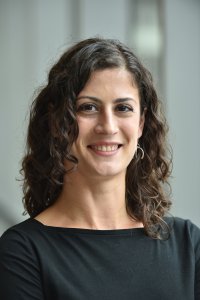 Post-Soviet Kazakhstan has been ruled by a single, personalist dictator since independence, and power is concentrated among a narrow elite. As extant literature on dictatorships predicts, state officials there regularly expropriate private property; valuable urban land is a favorite target. In this context, why would the Kazakhstani state – which has a highly effective security apparatus – take the seemingly redundant step of turning to courts to resolve the resulting conflicts with property owners? Moreover, why would citizens do the same, when they acknowledge courts’ lack of independence and high levels of corruption? In this lecture, Hanson argues that the central government compels local officials to channel disputes through civil courts to address negative consequences from their predatory, rent-seeking behavior. The dictator seeks to control rather than eliminate that behavior, because tacit permission to use their positions for self-enrichment helps ensure subordinates’ loyalty. However, it also generates costs for the autocrat. In particular, it sparks social unrest. Requiring local officials to channel conflict through courts offers an improved outcome for a few victims, while reducing the ability of all to engage in protests; it also creates and enforces guidelines for officials’ informal behavior. In short, formal legal institutions help manage corruption and its consequences. In making these arguments, Hanson draw on extensive in-country fieldwork in three regions of Kazakhstan, including interviews, ethnographic observation in district and appellate courts, original survey data, and official court records and other documents.

Margaret Hanson is a Weiser Emerging Democracies Postdoctoral Fellow for the 2017-18 academic year. Her research focuses on institutions that help autocracies endure. Specifically, she examines how formal and informal institutions interact to shape governance in authoritarian regimes. Her broad research interests include authoritarian stability, governance, and development, with an emphasis on the former Soviet Union. 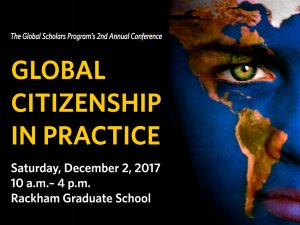 Global citizenship is a popular idea among many of us, yet we do not always conceptualize or actualize it in the same ways. This conference is an opportunity to share interdisciplinary approaches to global citizenship, with emphasis on how we put this idea into practice.

Students, faculty, staff, and community members are invited to share their relevant research, experiences, and actions using a variety of formats by submitting a poster or concurrent session proposal by Monday,
November 13.

Sponsored by Global Scholars Program and Global Engagement, Office of the Provost

Prof Kurtzer served as US ambassador to Egypt under President Bill Clinton from 1997 to 2001, and as ambassador to Israel under President George W. Bush from 2001-2005. He has edited or co-authored three books on American policy in the Middle East and, during his 29-year career in the U.S. foreign service, held a number of positions concerned with formulating American policy for the region.

This talk is also sponsored in part by the Hannah S. and Samuel A. Cohen Memorial Foundation. 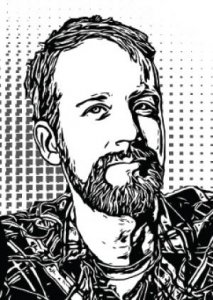 Nate Powell began self-publishing at age 14, and graduated from the School of Visual Arts in 2000. His work includes You Don’t Say, Any Empire, Swallow Me Whole, The Silence Of Our Friends, The Year Of The Beasts, and Rick Riordan’s The Lost Hero. Powell is the first and only cartoonist ever to win the National Book Award. His work has also received a Robert F. Kennedy Book Award, two Eisner Awards, two Ignatz Awards, two Harvey Awards, the Michael L. Printz Award, a Coretta Scott King Author Award, four YALSA Great Graphic Novels For Teens selections, the Walter Dean Myers Award, and has been a finalist for the Los Angeles Times Book Prize.

Powell has discussed his work at the United Nations, as well as on MSNBC’s The Rachel Maddow Show and CNN. His books have been placed on school curriculum in over 40 states. His animated illustrations in the Southern Poverty Law Center’s Selma: The Bridge To The Ballot documentary will reach roughly one million students in 50,000 schools across the nation.

This event is part of a series of Fall 2017 social justice events called Marching Forward. Visit the Marching Forward website https://sites.lsa.umich.edu/marchingforward/ to learn more about the keynote talk by Congressman John Lewis, Andrew Aydin, and Nate Powell, as well as other events in the series.

Join U-M students, faculty, and staff in this storytelling event as part of the International Career Pathways series. Audience members will get to listen to storytellers share about their international experiences. This event is similar to “The Moth” in which true stories are told in a live setting. A Hot Chocolate Bar will be provided.