This event is part of the The Poverty Narrative: A Midwest Perspective series.

This FREE virtual conference is dedicated to fostering a deeper understanding of poverty in the U.S. and especially the Midwest.

Interactive webinars will take place on Tuesdays and Thursdays from June 9-25, bringing together journalists and academic researchers from across the country to promote in-depth, impactful, and solutions-oriented media coverage of poverty-related issues.

While academic research contributes to a deeper understanding of poverty-related issues, the media is uniquely positioned to share those findings and shape how policymakers, community leaders, and the general public think about poverty. Coverage of economic mobility issues is now more urgent than ever in light of growing income inequality in the U.S. and the economic downturn related to the COVID-19 pandemic.

This series is open to anyone interested in improving the narrative around poverty in the U.S. – from exploring new storytelling strategies to translating complex research for deeper public engagement. Sign up for all, or only those you’re most excited about.

For journalists, this series offers a chance to hear from researchers and public policy analysts from the Midwest’s leading poverty research universities, identify new data sources to strengthen their storytelling, learn how to uncover the real-life impact of complex public policies, and hear tips from veteran journalists and other experts on how to report for and about people living in poverty.

For academics, this series will provide an opportunity to hear from journalists from across the country who report on the topics they study, gain a deeper understanding of how to effectively work with the media to improve the public’s understanding of poverty issues, and hear tips about how to promote your research to the public.

If you already registered for the originally-scheduled in-person conference, please sign up for the virtual sessions. Sign up for the whole series or select a few sessions.

Coronavirus relief efforts have launched a new tangle of public policies dictating who receives aid and when and how that aid is delivered. In this panel, veteran journalists will share their experiences cutting through the wonky world of public policy to uncover the real-world impact of policymakers’ decisions and the role academics can play in helping the public understand these issues.

This event is hosted by Poverty Solutions at the University of Michigan as part of the Midwest Mobility from Poverty Network. 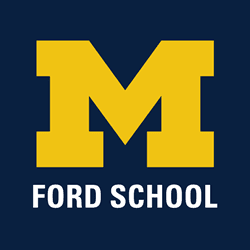 The Environmental Policy Association at the Ford School of Public Policy is hosting a teach-in about approaches to climate change across various sectors of policymaking. Policy professors will give lightning talks about how environmental issues are approached in their respective research areas, including international, economic, social, and health policy. 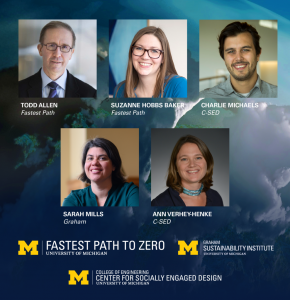 Fifty years ago, U-M held the nation’s first “Environmental Teach-In” in March, 1970. The five-day event served as a model for the first Earth Day celebrations held nationwide the following month on April 22. Today, concerns about our environment are more urgent than ever. Join the University of Michigan March 9–14 as Earth Day at 50, a yearlong commemoration of that event, comes to a crescendo with speakers, teach-ins and activities across campus and various Ann Arbor venues.

The Department of Nuclear Engineering and Radiological Sciences is hosting two events. These events are free and open to the public – please join us in support of Earth Day!

Deploying clean energy is a complex multi-disciplinary task and, to be most successful, requires approaches that combine the best technology, acceptable costs, public policy approaches, and social decisions.

Overpopulation
A discussion on one to(o) many.

For more information and/or to receive a copy of the readings contact Barry Belmont at belmont@umich.edu or visit https://belmont.bme.umich.edu/bioethics-discussion-group/discussions/.

The Need for New Social and Public Policies

This course for those 50 and over will examine how the social and legal structural oppression of Black American women is perpetuated in America systematically and structurally. We will critically analyze how black women remain socially subjugated in spite of claims of gendered equality through the analysis of theoretical concepts associated with colonialism and imperialism.
Instructor Tanya Omolo is dual degree graduate student at the Gerald R. Ford School of Public Policy and the School of Social Work at The University of Michigan. Her primary research and policy focus predominately concentrates on the intersection of gender, equity, and human rights for women in developing countries.

This is the inspiring story of how Dr. Mona Hanna-Attisha, alongside a team of researchers, parents, friends, and community leaders, discovered that the children of Flint, Michigan, were being exposed to lead in their tap water—and then battled her own government and a brutal backlash to expose that truth to the world. Paced like a scientific thriller, What the Eyes Don’t See reveals how misguided austerity policies, broken democracy, and callous bureaucratic indifference placed an entire city at risk.

And at the center of the story is Dr. Mona herself—an immigrant, doctor, scientist, and mother whose family’s activist roots inspired her pursuit of justice. This fall we are collaborating with Great Michigan Read, and other community partners, to enjoy participating in a wider project. Michigan Humanities’ Great Michigan Read creates a statewide discussion each year on the humanities themes of a selected book.

Mona Hanna-Attisha, MD, is the founder and director of the Michigan State University and Hurley Children’s Hospital Pediatric Public Health Initiative. Currently an associate professor of pediatrics and human development at the MSU College of Human Medicine, she has been named one of Time magazine’s 100 Most Influential People in the World for her role in uncovering the Flint water crisis and leading recovery efforts.

Firearm Safety Among Children and Teens (FACTS) has organized a inaugural research symposium featuring national experts to bring attention and focus to the current science and research on a critical and growing public health issue: prevention of firearm injury in children and teens. We are accepting poster abstracts that will identify innovative research and strategies to further expand and enhance prevention of firearm injury in children and teens. Topics of interest are universal and secondary firearm injury prevention, epidemiology, risk and protective factors, and policy analysis of firearm injury prevention. The conference goals are to share science on the topic and network with colleagues from multiple disciplines (medicine, public health, criminal justice, law and more) as we work together to reduce injury and death by firearms. After review, authors will be notified of the planning committee’s decision by email mid-July. Submit all abstracts electronically.

Attend the Central Bank of the Future conference on October 2nd and 3rd, 2019 in Ann Arbor, Michigan. Topics will include, among other areas, technology and financial inclusion, digital currency (fiat and non-fiat), AML and financial inclusion. Speakers and attendees will include individuals from  standards-setting bodies, central banks and other financial regulators, and policymakers, as well as futurists and technologists, and other financial ecosystem stakeholders.

This conference will consider how the role of a central bank could evolve in the future to enable it to make greater contributions toward financial inclusion. It will consider monetary policy, financial sector supervision, and payments systems, as well as other functions. The conference is meant to identify technologies, processes, or tools that could benefit a central bank in supporting public policy objectives related to inclusion, and consider how other sectors, including the private sector and philanthropy, might have a role to play in supporting the development of those tools.

Flowing from clubs to initiatives and centers, the Ross Business+Impact Initiative is an essential part of the Stephen M. Ross School of Business. Not only that, but through partnerships with other U-M schools and specific programs, we create multidisciplinary action-based learning opportunities across campus. New and existing students interested in poverty alleviation, healthcare access, sustainability, human rights and diversity should attend to discover opportunities to make a difference in the places where they live and work, at the school, and around the world.

This event is a tabled event with multiple constituents, and there will be light hors d’oeuvres served.

This conference is organized by the Scientific Panel on Population, Poverty, and Inequality of the International Union for the Scientific Study of Population (IUSSP), in collaboration with the Population Studies Center in the Institute for Social Research at the University of Michigan. The conference will feature researchers from a wide range of countries presenting research analyzing the interaction of population with poverty and inequality in low-income and middle-income countries. Schedule is available on the conference web site.