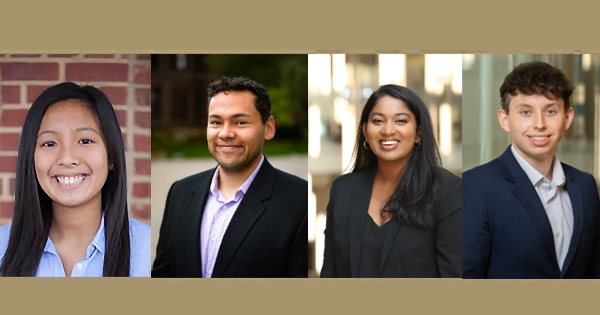 ANN ARBOR – Oct. 12, 2022 – Business+Impact (B+I) is pleased to announce that Summer Abiad (MBA ’23), Connor Donnelly (MBA/MS ’23), Harshita Pilla (MBA/MURP ’23), and Joss Woodhead (MBA ’23) are the recipients of the 2022-23 Skip and Carrie Gordon Scholarships for outstanding commitment to solving complex social challenges. The award comes with $7,500 for each recipient. Gordon Scholars serve as B+I Student Ambassadors for the 2022-23 academic year.

Summer went to Davidson College for undergrad, and had the opportunity to do a pro-bono project for an NGO client working to improve sexual and reproductive health outcomes for women and girls. Afterward, in Chicago she joined her company’s Women’s ERG and healthcare/life science DEI leadership teams; and created an Intersectional Leadership Toolkit, drove annual benchmarking surveys, and facilitated design thinking workshops that led to a Women’s Advocacy Playbook. She also signed up for periodic days of service at her company with food pantries, emergency relief package packing, and cleaning up parks. She wanted to do something more consistently so she also signed up to be a mentor with HFS Chicago Scholars.

Upon arrival at Michigan Ross, Summer worked on three pro-bono projects for local nonprofits (Detroit Food Academy, Birth Detroit, and the Alliance for Jewish Renewal) through the Community Consulting Case and Detroit R&B clubs. She took advantage of MAP to do a 2-month project with High Scope Educational Research Foundation, a nonprofit in Ypsilanti looking to renovate an abandoned church into a community center.

This past summer started with the Open Road program, where her team went around the Midwest working with Black-owned social enterprises. Her summer continued with an internship with the Forté Foundation, where she used business tools towards a mission of achieving gender equity in MBA programs and business management. Finally, Summer has taken advantage of the social impact classes at UM, such as Business & Society Equity Analytics, and Grant Writing & Fundraising to gain theoretical and practical tools for a career in impact. Post-graduation she plans to work in social impact, potentially through social impact consulting, and as an active member of the community where she lives. She wants to be a better and active ally no matter what space she is in and continue to be civically engaged.

During his undergrad at Cornell University, Connor majored in Economics and minored in Inequality Studies to tackle the climate crisis and broader social inequities. Upon graduation in 2017, he became an AmeriCorps Member for City Year Los Angeles. At the same, he was a Team Leader for a youth engagement group that became an AmeriCorps program the following year: Changeist. After completing a year of service with AmeriCorps, Connor became a Peace Corps Volunteer in rural Uganda as a 5th grade Math, Science, and English teacher. Upon coming to Michigan Ross, Connor has been part of Net Impact, the DEI team of the Erb Student Advisory Board, the JEDI team for the Ross Energy Club, and the Nonprofit Board Fellowship through Business + Impact.

After serving as a Board Fellow, the board at the Salvation Army asked him to continue his project through the summer as an internship before it was ultimately picked up by two people the following year. After a yearlong Nonprofit Board Fellowship experience, he became a Senior Board Fellow for this year’s incoming cohort, as well. As an MBA/MS Environmental Justice candidate, Connor has taken sustainability- and equity-focused courses like Social Vulnerability and Adaptation, Energy Justice, a Masters Project on food waste, and a MAP course involving an energy poverty startup in Brazil. His two summer internships were both in the nonprofit sector — with Salvation Army and the Environmental Defense Fund. He was recently selected as a GreenBiz 2022 BIPOC (Black, Indigenous, Person Of Color) Emerging Leader because of his efforts in larger impact and his obvious intentions to address environmental justice within the business sector moving forward. His long-term goal is to start his own social enterprise surrounding climate inequity, primarily for his fellow Latinos. 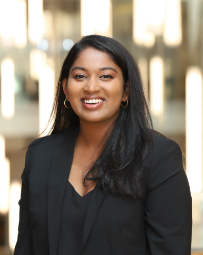 Harshita’s undergraduate experience at UC Berkeley exposed her to the systemic injustice that disadvantaged communities face and introduced her to the ways in which the built environment intensifies these conditions. After college, she decided to take a role consulting for FivePoint on a mixed-use development aimed at revitalizing Bayview and Hunter’s Point, historically low-income and predominantly African American neighborhoods in San Francisco. As a result of voicing her concerns about diversity while at We Work, she was elected to take part in the regional We of Color committee, for underrepresented communities of color to engage with each other both on a local and company-wide level.

It was Harshita’s exposure to the realities of community displacement and housing inaccessibility that motivated her to pursue graduate education in Urban Planning and Business at the University of Michigan.  Even before arriving in Ann Arbor, she tapped into the community, launching “MBA Students Care,” a fundraising campaign in response to the tragic deaths of George Floyd, Breonna Taylor, and Ahmaud Arbery. Since arriving here, Harshita’s commitment to building an inclusive community at Ross is displayed beyond her section president responsibilities and spans into many spaces, from her role as the VP of Student Life in the Ross DEI Committee to her involvement in the Consortium for Graduate Study in Management. Engaging with the impact curriculum at Ross has led Harshita to the two most formative experiences she’s had in graduate school: The Social Venture Fund (SVF) and the Business+Impact’s Board Fellows program. Now she serves as director of culture and recruitment for SVF, and this year is seated as a senior board fellow in the Board Fellows program. Harshita’s long term career goal is to apply the lessons learned from both her previous work experience and her MBA coursework to start her own venture focused on developing creative solutions for affordable housing for the historically excluded.

Not long after graduating from the University of Southampton, Joss took 12 months out of his career to volunteer, fundraise, and travel across Asia, Africa, the US, and Europe — and lived through a deadly earthquake in Indonesia.  In response, he distributed food, gave blood and raised money for the host family he stayed with. In South Africa, Joss undertook wildlife conservation work on a private game reserve and also volunteered at a children’s orphanage. Later,  he completed a professional certification that focused on how environmental and social factors can best be integrated within the investment and finance industry.

Immediately upon arriving at Michigan Ross, Joss participated in B+I’s Board Fellows program, working with Neighborhood Legal Services Michigan, and was asked by the chairman of the board to return as a full board member. He  joined the Net Impact club, and was a prize winner for a national case competition that focused on improving the sustainability and social impact practices of a major retailer. Joss’ six-week MAP project involved creating and implementing a deforestation/social impact policy for the largest food distributor in the US. Following this, he was admitted to Ross Open Road, where he and three team members drove across the US (Columbus, Nashville, St Louis, and Detroit), working with black- and women-owned businesses and nonprofits. At the beginning of his second year at Ross, he was chosen as the VP for Professional Development for Net Impact Club and VP for Recruitment for Ross Open Road. Joss is currently leading an initiative at Ross that aims to integrate more ethics, social impact, and environmental sustainability topics within the core curriculum.

Joss’ ultimate personal aim is to set up and run his own foundation/nonprofit, focusing on bringing individuals situated at the base of the economic pyramid out of poverty through developing areas such as sanitation, education, and women’s rights.

Business+Impact is proud of all three winners, their aspirations, and all that they have already accomplished!